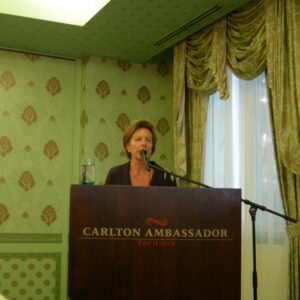 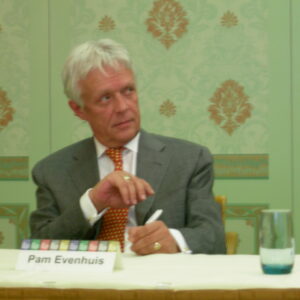 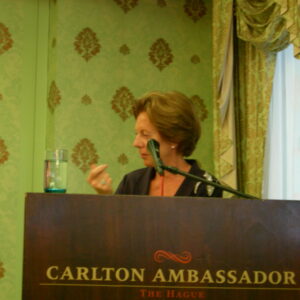 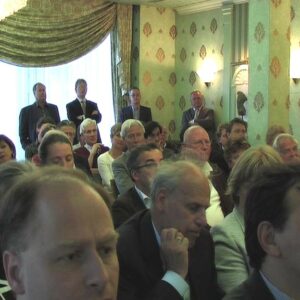 “The European Union is extremely successful, it is a magic spell.” Tonight Euro Commissioner for Competition and VVD party member Neelie Kroes speaks at the International Politiek Café. “I am very pleased with the high turn-out tonight. If I were you I may just have taken the opportunity to enjoy a drink on a terrace instead,” she starts jokingly.

“Setting up the EU in less than a lifetime, has been an enormous undertaking. In the last fifty years we have created something which has impressed many countries outside our continent.” Kroes remembers well how it was at the end of the seventies, when there were only six family members’. “Whoever would have told me then that we would have increased this family to 27 members in 2007, that the Euro would have been implemented, there would be an international market and I would be a commissioner, I would have had locked up.”

Since 2004 the European has welcomed twelve new members. Kroes: “These members are extremely loyal. Of course there are problems, but which family doesn’t? We have succeeded in letting the government systems we detest go out by the back door. There should be no doubt in anyone’s mind that we have created a win-win situation. And the new members have contributed to the strong position of the de EU.”

“When asked by Jozias van Aartsen for this position, I had my doubts. Could it work 27 countries at one discussion table? That is a lot of people and you cannot dismiss the various languages and political backgrounds they bring with them. But it works! Each member state – while keeping their identity – has proven to be committed to building the EU so that that next generations may benefit.”

Kroes considers the referendum on the European constitution “not a very smart move”. In her opinion it was not the constitution which was being dismissed, but many other factors. “To hold a referendum was not a wise decision. The only memories we have of a referendum go back to the fifties and now we have used it for such an important decision. It can be a fantastic tool, but it needs a clear and simple question which can easily be answered by a ‘yes’ or a ‘no’. In this case it was ‘no’ against a EU which was considered too fast, too much and too expensive. It was apparent that no-one in the Netherlands new what was happening in Brussels. Our own politicians are partly to blame for this. Whenever they got into trouble they put the blame on Brussels. We should stop passing the buck to Brussels. It is time to make it clear to people what the European Union really stands for. As an example, it does not mean losing our national identity.”

“I compare my role to that of a referee during a Premier League match. And the rules of a team of fifteen players, instead of eleven, need to be different. The Treaty of Nice for instance can no longer continue, things will have to change. It is extremely important for the future that we make a stand together. Europe should speak with one voice.”